﻿Steve Klepetar  teaches literature and writing at Saint Cloud State University in Minnesota. His work has received several nominations for the Pushcart Prize and Best of the Net. His latest collections include Speaking to the Field Mice (Sweatshoppe Publications), Blue Season (with Joseph Lisowski, mgv2>publishing, and My Son Writes a Report on the Warsaw Ghetto (Flutter Press). An e-chapbook, Return of the Bride of Frankenstein, is forthcoming from Kind of a Hurricane Press. 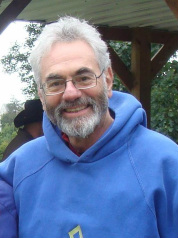 1) Tell us some things about yourself

It might interest you to know that I was born in Shanghai, China. My parents were holocaust survivors in two different ways.  My father was expelled from Czechoslovakia by the Nazis in 1939 and joined the Jewish community in Shanghai.  My mother was sent to concentration camp.  She survived and joined my father there after the war.  I was born in 1949 and my family emigrated to the U.S. when I was two months old, so my experience has been very similar to that of a first generation American, with the added inconvenience of being a naturalized citizen with a strange and complicated birth story.  I grew up in New York City and was educated at Stuyvesant High School, Binghamton University and The University of Chicago.  I have spent the past 39 years teaching literature and creative writing, mostly at Saint Cloud State University in Minnesota.

2) Why did you start writing poetry and when was it?

While I recall being the poet laureate of my sixth grade class (this may be a reconstructed memory), I started writing poetry seriously in college in the late 1960’s.  Since I always lived a good bit of the time in my imagination, and since words came easily to me, (unlike, say, drawing) poetry became a natural way of expression, allowing me to explore various voices and worlds.

Needless to say, poetry is very important to me.  I memorize poems fairly easily and naturally (part of the professor’s bag of tricks, if I admit the truth) and I get a great deal of pleasure reciting poems in my head when there is nothing else to do or read.  Believe me, this comes in very handy when one is having an MRI!  I love the blending of sound and sense, the visceral power of vivid imagery, the strangeness of other voices.  I also love to write poems and actually feel a sensation of calm alertness and even joy in the act of creating.

4) Where do you prefer writing? Do you need a certain space? Do you have a daily routine?

Because of the nature of my work, I have tended to write in my office whenever I had a reasonable space of uninterrupted time.  When I was on sabbatical last year, I wrote at a little desk in our kitchen (where I am writing at this very moment).  My preferred routine is to rise early, eat a light breakfast and go for a walk, shower and then sit down to write.  I am, by preference, a morning writer, though if it comes to that, I can write anywhere, at anytime.

Since I regularly teach poetry, the work and voices of many writers and poets live in my head. The Williams – Blake and Wordsworth and Carlos Williams – come to mind, but also Wallace Stevens (especially short poems like haunting “Snow Man”), some Frost, H.D. for her concision and images.  I’ve been directly, and consciously influenced by the Holocaust poet Paul Celan, whose book sat on my desk for a year as I responded to poem after poem.  I am now slowly reading Audre Lorde’s book, The Black Unicorn.

6) What is your basic theory about life? Or about the world we live in.

I don’t know that I have a theory about life or the world we live in, but my sense of both is darkened by my family history.  Much of that family was annihilated by the Nazis, including three of my grandparents, and my parents and their siblings were exiled from their homelands.  Long after that terrible period in history, people continue to suffer genocide and displacement, inequality, poverty and lack of freedom.  At the same time, I have been incredibly lucky.  I have been happily married to the same woman for nearly forty-four years, have two intelligent, capable, athletic and gentle sons, both of whom are happily married as well and have sweet, healthy children.  In our world, joy braids around suffering, and I try to embrace moments of health, beauty and pleasure, while never losing sight of the world’s continual sorrow.

7) Does poetry help you to defeat or soothe your fears?

I wish it could, but I’m afraid that fear lives outside of poetry and gnaws at me whenever I think about what awaits my sons and grandchildren as we race toward further environmental degradation and the increasing effects of climate change and inequality. Poetry does help me to be mindful of my inner life, my subjective responses, as I struggle to make meaning and, through language, attempt to create beauty from experience.

8) How does time influence you?

My poems often deal with time and its strange, subjective movements, especially as the past impinges on the present.  To paraphrase Faulkner, “The past isn’t dead.  It isn’t even past.”  Memory obliterates time, in a way, or at least the linear experience of time, the clock time most of us live by day to day.

9) Do you ever think in what way the reader perceives your poetry and has this thought ever influenced the way you write?

Probably not enough.  I tend to write for myself as audience, listening for what pleases or moves me in terms of sound, image, action.  Luckily, it often works out that readers respond in ways that please me, but certainly not always.

10) Is there a certain idea (or ideas) you are trying to communicate through your poetry and in what way do you use the language to help you with this?

Sometimes, especially in the more “documentary” kinds of poems I’ve written about my family history, as in my chapbook My Son Writes a Report on the Warsaw Ghetto (Flutter Press, 2013) or in the few poems I’ve been commissioned to write.  Often, though, I surrender to the spell of the words in my head, letting the first line or phrase tumble out.  I then try to follow where that opening leads, so often I sit down to write without a subject in mind or a conscious agenda.  Sometimes the voice is mine (or mine in certain moods), but often it is someone else, a character I discover through the process of writing the poem.  With some exceptions, I am not a particularly autobiographical poet.

11) Do you work from a preconceived idea or from spontaneous invention?

As I said above, the answer is really both, depending on the circumstances, but usually I work from spontaneous invention.  It’s really easy for me to see why the Greeks believed in those deities of inspiration, the Muses, because in the right mood the poem seems to flow from somewhere outside myself – or somewhere deep inside that seemed unreachable before the spell of the writing began.  That’s not to say I believe in some kind of dictating angel, but that the Greeks found an apt name and symbol for what it feels like to be in the throes of the creative act.

12) What does your revision process entail?

Reading and re-reading and re-reading some more, and complete brutality in dealing with my missteps.  I try to read my work as if someone else had written it, and, as much as possible, not to let myself fall in love with my own words.  Telling oneself that a line or phrase or description falls flat or crosses the line into cliché, sentimentality, banality or mere raving can prove difficult, but I find it necessary not to let myself get away with anything that would bother me in someone else’s work.